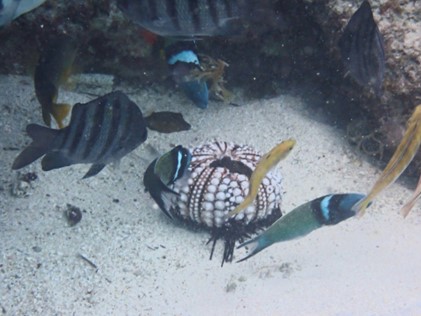 Advisory: Presence of a fatal disease reported for long-spined sea urchins in Aruba 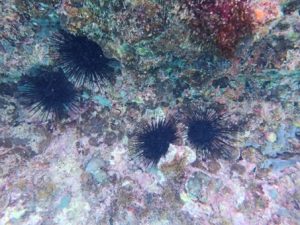 Reports from various local divers of dead- and dying long-spined sea urchins (Diadema antillarum) in Aruba’s coastal waters are a serious cause for concern and action. According to Tatiana Becker, MSc. ing. (Marine ecologist), reported observations and shared photographs almost certainly verifies the presence of a mysterious fatal sea urchin disease that has been spreading rapidly throughout the Caribbean causing massive die-offs.

The die-off mainly affects long-spined sea urchins, which is a species indicative of coral reef health. Due to their important ecological role as grazers, similar to parrotfish, the health of the species has implications for the tourism and fisheries sector, which rely on a healthy coastal ecosystem.

The disease is characterized by the loss of spines and sloughing of tissue, which has been observed in at least two locations on Aruba, Tres trapi and Mangel Halto.

“I snorkel or dive Tres Trapi almost every week, and suddenly from one week to another I saw large numbers of dead and -dying sea urchins. Not just myself, but other divers reported seeing the same thing occurring in the week of the 25th to 31st of July. I photographed the long-spined sea  urchins undergoing distinct stages over just a few days; 1) healthy individuals attached to hard, rocky surfaces (image 1), 2) detached individuals, ending up in the sandy substrate, where they shed their spines (image 2), 3) individuals with increasing loss of spines and tissue, where there skeleton becomes exposed (image 3), and finally 4) they die, and the detritus is further broken down by fishes and other marine life (image 4).” reported Albi Valdez, BSc (marine conservation activist, Divemaster). Mr. Valdez reported his observations to the website of AGRRA, https://www.agrra.org/sea-urchin-die-off/. While his observations are under review, the photographs and counts give a grim outlook for Aruba’s long-spined sea urchin populations.

Luckily, an underwater census of these sea urchin populations was conducted by Tatiana Becker early July 2022, before dying/dead sea urchins were reported. This provides a good baseline for monitoring the actual loss and potential recovery of these sea urchins. A planned repeat census will provide an actual estimate of the loss that has occurred at Tres Trapi and Mangel Halto, which is highly valuable for conservation planning and management in Aruba.

Urgently, divers and snorkelers are requested to report additional observations and photographs of long-spined sea urchins to AGRRA, which helps verify its presence and potential further spread along the coast. Even when no dead- or dying urchins are observed, this information can still  be invaluable to scientists and resource managers (DNM and FPNA). You can help in preventing the spread of the disease by cleaning wetsuits and diving gear thoroughly with fresh water after each dive and avoid diving or snorkeling from a “diseased site” to a “clean site”. Lastly, people should not touch or move live, dead or dying sea urchins.

The Directorate of Nature and Environment (DNM) is grateful for the contribution and notification of both Tatiana and Albi. The National Park will make dives necessary at in the Marine Park. This has our attention! 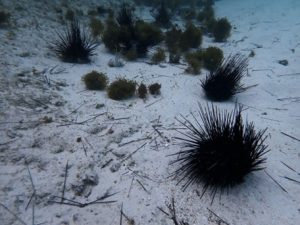 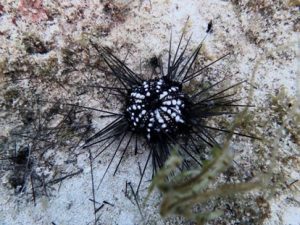 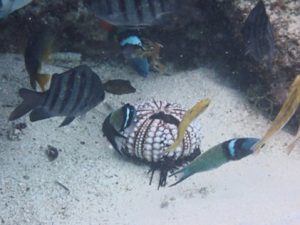